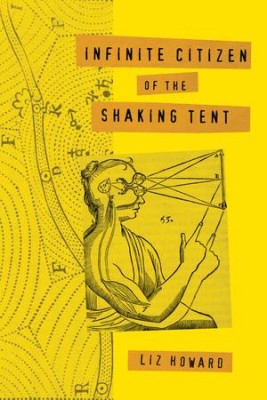 July 10, 2016 – Last week Liz Howard became the first indigenous Canadian and youngest person ever to win the prestigious Griffin Prize for poetry for her book Infinite Citizen of the Shaking Tent.

Howard is from Chapleau, Ontario and struggled in early life. “My upbringing was quite difficult and impoverished, and when I was young I sort of thought that perhaps it would be best to not exist… I guess I just want to say that it can get better. And for me, poetry made life possible.”

Howard has a day job, which is a good idea if you’re a poet. Poetry is one of the most esoteric art forms, without any sort of economic base or market at all. Poets are the poorest of all artists, making even less than potters. The Griffin Prize isn’t going to change that but still, it is a remarkable thing to reward poets and the prize is substantial: Howard took home $65,000 plus another $10,000 for taking part in the Griffin Prize readings the day before the awards gala, a fair fee for a day’s work (built on a lifetime of learning and experience).

Reviewed in Quill & Quire, Canada’s magazine for the publishing trade, Natalie Walschots said of Howard’s book: “The raw tenderness these pieces reveal is not that of a limping bird or weakened deer trailing behind the herd, but something backed into a corner, made more dangerous by virtue of its trauma. “I will be as loud / as I need to,” Howard asserts vigorously.”

My view is more circumspect. Howard is quite self-conscious; trying out the various devices by which we recognize poetry as “poetry,” for example, striking juxtapositions, hallucinatory imagery, surprising final lines. The narrative of her young life (she is 31) ties techniques together fairly well, but my feeling is there is still some way to go before Howard finds a more consistent, truer voice. For so prestigious a prize to be awarded to one so young and inexperienced seems incongruous. On the other hand, we can be grateful that at least one poet with promise has been given an inkling of what economic security might look like and a bold leg up towards a full-blown career in the arts.

You can listen to Howard reading from her book here: http://www.rcinet.ca/en/2016/06/03/griffin-poetry-prize-goes-to-liz-howard/.

This year’s judges for the Griffin Prize were Alice Oswald (UK), Tracy K. Smith (USA) and Adam Sol (Canada), each of whom read an astounding amount of poetry submitted for prize consideration: 633 books from 43 countries, including 25 translations.

Libraries across Canada will soon be stocking Howard’s book including, one hopes, our own Sioux Lookout Public Library.

P.S. Howard’s book, Infinite Citizen of the Shaking Tent, is now available at the library.