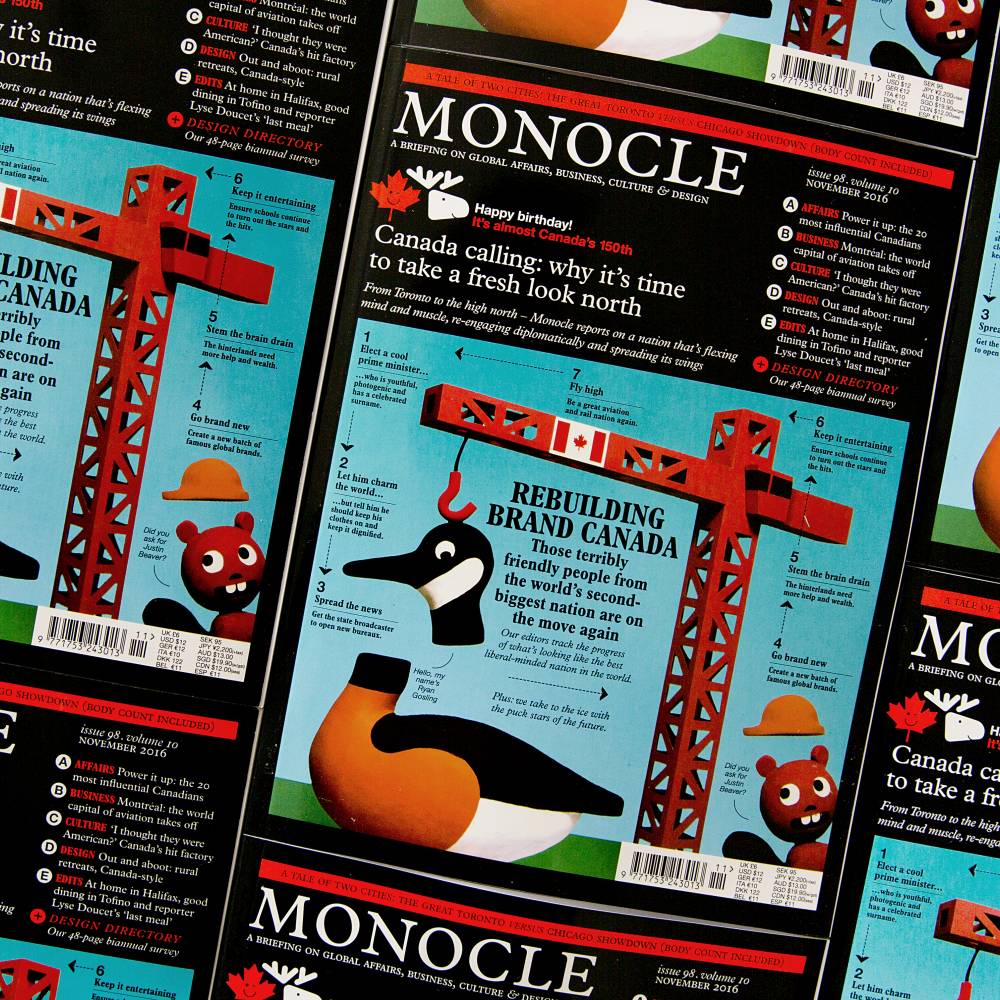 Monocle Magazine was started in 2006 by Tyler Brûlé, a Winnipeg boy who made his mark in the publishing world by creating a fashion/news/lifestyle magazine called Wallpaper in 1994. Some people might remember his dad, Blue Bomber Paul Brûlé.

Before 1994, Brûlé had dropped out of journalism school at Ryerson to work in the field. As a war correspondent, he was seriously wounded in Kabul, losing full use of his left hand. While convalescing, he had little to do but read and he came up the idea of a hybrid, international style/culture magazine.

That magazine, called Wallpaper, was an instant hit. He sold to Time Inc. in 1997 for £1m and stayed on as editorial director until 2002 when he left to work in the area of corporate branding through his company Winkreative.

Monocle is Brûlé’s second venture into publishing and, he says, his ideal magazine. It’s a lot like Wallpaper but more news focused and purposely international, It’s also in a smaller, less glossy, more compact format.

The November issue is devoted to Canada: “Canada calling – why it’s time to take a fresh look north” and promises to deliver perspective on all that’s great about Canada.

Canada calling starts out, understandably, with the impossible (to most international urbanites) beauty and remoteness of cottage country, so familiar it is almost taken for granted up here in Sioux Lookout.

The magazine goes on to highlight the people who are our power players, people like former Lieutenant-Governor Adrian Clarkson.

Toronto is compared to Chicago to gauge its international caliber in terms of diversity, culture, wealth distribution, transit, housing, etc. And passes with flying colours (spelled with a “u.”

Monocle peers into the depths too, trying to unravel the essential qualities that magically make Canada a world-respected brand.

Although small in stature, our military is acknowledged for the important role it plays on the global stage, and our Minister of National Defence, Harjat Sajjan, who is a Sikh, is given a profile, which should raise more than a few eyebrows south of the border given the unabashed bigotry and xenophobia of their President-elect.

As political events of the past few weeks show a dark cloud stretching coast to coast across the US, the “USA” brand is being at risk of being irredeemably tarnished. It will, for the foreseeable future at least, be darkened, in the shadows, making this Canada’s time to shine. We have to thank Monocle and a native son, Tyler Brûlé, for helping with that mission.

While the November issue of Monocle is already out online, I’m looking forward to getting the print copy from the grocery store. It’s pricey at $12, but then what’s not pricey these days?