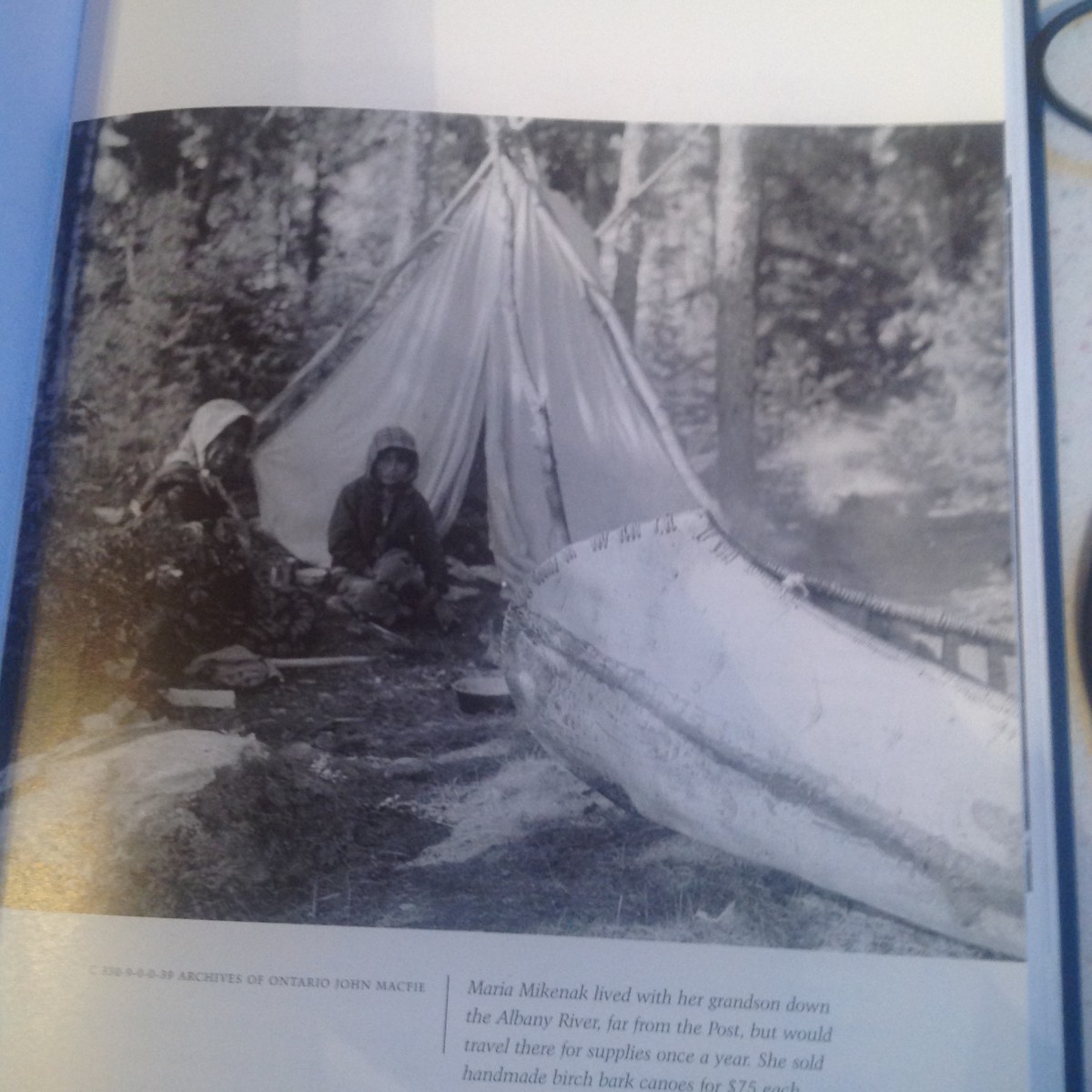 “Ba ta eh tay so win” is an Ojibway expression that means everything you do comes back to you. It is like the idea of kharma and  related to other expressions like the Golden Rule, the two-edged sword or sins of the father…

The following is excerpted from the book, Mishkeegogamang: The Land, the People and the Purpose by Marj Heinrichs and Dianne Hiebert, with the people of Mishkeegogamang [Rosetta Projects, 2003].

“Maria was a favourite visitor at Osnaburgh House when Jock Gibb was the manager there. Jock says:

…[Maria Mikenak] still built canoes the old way from birch bark, spruce gum and roots. There was not one nail in her work. She lived way down the Albarny River and came to the post only once a year in her tiny birch bark canoe.
A grandson of about 12 years old in 1959 always accompanied her. He lived with her all the time. Her family took care of getting supplies to her mot of the year but she loved to make her yearly trip to the post. She would tell me tales ofthe bush and I would reciprocate with tales around the post she hadn’t already been told by her family. She would produce a while slew of little packages with money wrapped in each one. This was the residual of pension cheques and payments she had received from the canoes she had sold. The HBCo had one in their Winnipeg museum. The Dept of Lands and Forests purchased one for their Ottawa museum. She was paid $75 for a canoe.
She was always the highlight of my summer when she came to the post. Both she and her grandson were charming. Their naivité was so natural. They obviously lived a contented, happy life because it reflected in their every attitude. We thought we lived the idyllic life but theirs was Utopia.
When they climbed so carefully into their tiny craft and paddled off across the lake, I would watch them till they were out of sight and think about what was going to happen now with the Indian Agent imposing his New Osnaburgh and white man’s ways. Why?”(1)

Why indeed. Maria and her grandchild lived a fragile and exquisite life on the land, relying on their canoe to get to the places where rabbits, fish, berries or wild rice were abundant and could sustain them. Maria was also an entrepreneur, renowned not only for her canoes but for her dishes made from birchbark, folded and sewn into shallow baskets.(2)