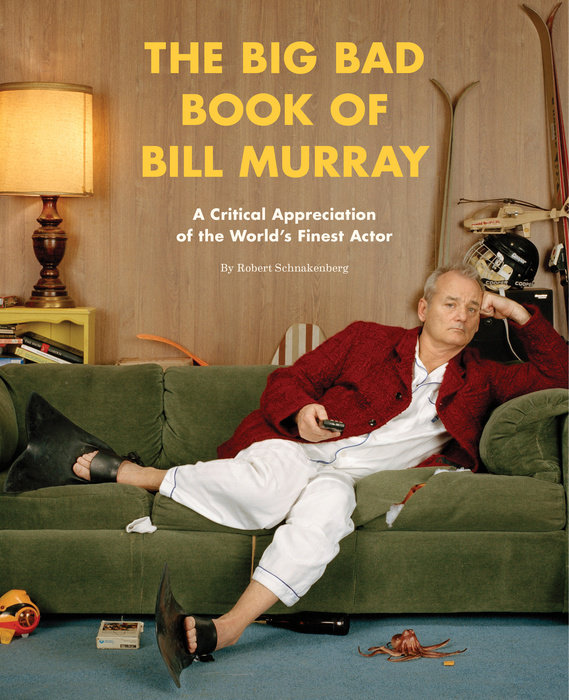 I love Bill Murray. I don’t know if he’s a good enough/great enough actor to deserve a “biggest/baddest” tribute but this is a fun book, delightful to read even if you are not the biggest/baddest fan.

I found it in what you might call the produce section of the library, where they keep the freshest books, the ones that have just come in. I browsed the section a few months ago, picked it up, had a few chuckles and put it back. Then a few weeks ago, I thought I should take a better look and went back and took it out. Of course now it’s overdue.

The Big Bad Book of Bill Murray is a filmography and trivia book, organized like an encyclopedia: “A” is for… About Last Night, a movie Murray was considered for but lost the part to Rob Lowe, Academy Awards, one of which Murray has yet to win, Agents, which Murray hates (he is reputed to use a 1-800 number which takes messages he never collects), etc.

The book’s 272 pages are packed with pretty much everything you could think to ask about Murray, from his family – he is one of nine children raised by a single mom; his sister Nancy Mary is a Dominican nun – to Zeimmerli, Murray’s favourite brand of underwear, and Zombieland, a horror flic in which Murray had a memorable cameo.

As you can see even from the few entries under “A,” Murray’s life is much like the parts he plays, or you might say that a comedian and actor is truly what he is, there is no “on/off” switch, which makes the book’s subtitle claim that Murray is “the World’s Finest Actor” seem slightly less ridiculous.

Murray has definitely become part of the celestial pantheon of globally recognized celebrities, a success which is mirrored by his net worth, reported to be $140 million. How an entertainer/artist gets to be so successful is the story of the long travelled road. Whatever his slacker, sardonic persona, Murray is nothing if not a hard worker, from SCTV and Second City, to Saturday Night Live and then to increasingly good parts in films, roles big and small, sometimes as many as four a year.

I thought Murray might be Canadian, having performed with both Dan Aykroyd and John Candy but he was born in Chicago. Close enough. Sioux Lookout has so many strong and healthy ties to the US.

Murray has appeared in over 60 films, many forgettable bit parts but you’ll know the classics; Meatballs, Ghostbusters, Rushmore, Groundhog Day. My fav is The Life Aquatic with Steve Zissou, an absurdist story roughly trading on the notoriety of Jacques Cousteau. Lost in Translation is a great, great film. Murray should have won an Oscar for his effort. I’ve heard Murray’s voice for Garfield is brilliant. Too bad these films and most of Murray’s films can’t be found on Netflix.

The Big Bad Book of Bill Murray was written by Robert Schnakenberg, published by Quirk Books, Philadelphia and printed in, ta da, Canada. You’ll find it on the library shelves at 791.4 SCH… after I return it.

Do you have a favourite Bill Murray film?
__