On the last day of 2020, in the evening, New Year’s Eve in fact, I found myself, like a bazillion other people, on my phone, scrolling.

I screen-captured the whole thing, reproduced at right. Let’s see if I can keep writing to cover the space beside the image all the way to the bottom of the pic.

Searching for news online is crazy-making. If you subscribe to a “paper”, which one(s) do you choose? It’s hard to stick with just one, and if there are many, and there always are many, many moe, all equally accessible, or inaccessible, depending on how you look at it, nigh on impossible.

So I found myself, somewhat indifferently, reading the St. Catharine’s Standard, a modest publication from a smallish community in the Golden Triangle of southern Ontario.

The reading was challenging, incessantly interrupted by ads, top and bottom border ads that don’t move, ads that do move with the text, headlines of the paper itself.

It was, in a word, dizzying. This is no way to read.

I posted this story over on Medium, where I set up an account the other day, Medium wants to be different: ad free, available with minimal distractions across devices. The Atlantic thought this sounded pretty promising.

But Medium has taken hits. I don’t know if it’s turned a profit yet. It’s surviving, trying to set up a new, better reading experience.

Personally, I’m annoyed that they expect me to pay to become a “member”, meaning read it ($5/mo.) even though I’m a contributor. So I’m not joining, not for now. I’m looking for a soapbox, not news.

Perhaps they don’t know how to monitize me with big data. I’m fine with that. I left Facebook ages ago, after being an early adopter, because Zuk hasn’t figured out that he needs to pay people something for what he’s taking from them, i.e., data.

But I digress. What are we to do about online media?

Media itself is so broken content wise, one hardly cares, wishes they’d just go away, start over.

It’s too bad Donald Trump is a complete lunatic because he’s had quite a few  right intuitions, which is why he managed to become so popular. It certainly wasn’t his intelligence, or class.

Like about media. Without question, our mass media is biased. A Canadian Conservative was interviewed on CBC Radio the other day, only because he was calling on other Conservatives to jump off the Trump bandwagon. Otherwise we rarely if ever hear from them first hand.

He was cagey about his past support of Trump, and the interviewer, you could tell, did not want to let it go. It wasn’t enough to get a Conservative flipping over to a more liberal position, he had to be blamed for not being liberal in the first place.

I myself am so entrenched in liberalism, having spontaneously leapt to the ‘left’ as soon as I was old enough to vote, that I find conservatism just creepy. I really can’t understand how people can espouse values without empathy or even a simple sense of fairness towards others.

But as I get older, I am getting more conservative. Now I like to hear them out before castigating them.

Still, a lot of people consider themselves decent people and yet cleave to the ‘right.’ And as long as that’s a choice that’s available to them, shouldn’t they also have the right to talk their particular kind of talk without being assaulted at every turn?

This is what Donald Trump, albeit in his appallingly ignorant, muddled way, means to attack when he invented the term “fake news.” It isn’t that the news is factually wrong or intentionally misleading. (That would be more Donald Trump’s style.)

What “fake” means to Donald Trump and his troll army is “bias against conservative values.”

Of this there can be no doubt, the New York Times and The Washington Post being the worst offenders.

Liberal, educated ‘elites’, are part of the critique that is also well-founded. Elites are essential to the fourth estate. Without elite families, elite schools and elite businesses, there would be no ‘mass’ media. It has always been the children of privilege who make their way into ‘the arts,’ having fortunes to fritter away in the dubious enterprise of ‘speaking truth to power.’

Of course, it is not as if there aren’t elites on the right. Indeed, those elites are, if we go by our liberal intuitions alone, worse. More secretive, richer and without scruples of any sort. Dangerous.

But conservatives are not about to get all analytical and self-critical on us any more than the liberal media are going to start coming clean about their own biases.

News is “fake” (in the metaphorical sense” for other reasons too. The media are addicted to trauma. Thy seek out disaster and promote fear. A forecast of grey skies tomorrow becomes “Deadly storm threatens civilization.”

For Donald Trump, it must’ve been so obvious. Not a good thing to say about him, no matter what he did. It struck me as odd that he continued to do press conferences and hire press spokespersons who could not deal with issues and reporters questions in an intelligent and fair way.

It was as if, and perhaps this is obvious to all and sundry already, he wanted the press to be against him. Driving a wedge between truth reporters (as biased as they may be) and the public, opens the way for laying down your own truth. And we know how much Mr. Trump is dedicated to making his own reality, no matter how preposterous, offensive or dangerous to others.

But here’s the kicker.

Usually I am hyper-sensitive to the bad news hyperbole of the media, and hyper-critical, but lately I’m finding that instead of putting my phone away and watching/listening to less news, I’m actually doing more and more.

What did somebody call it the other day on the radio? I think it was Jill Lepore on The Current, talking very fast, very intense, I had to turn it off. Anyway, she confessed to what was it? Doom trolling? Or doom scrolling?

Ya, been there… Am there.

Anyway, let’s just say the reading experience online is so dissatisfactory, we are literally dying from distraction. And longing for something, anything better to come along.

Can’t get it where I live. Not anything of substance anyway. None of the ‘big’ papers, even the ones not that big that are not so so far away (Winnipeg, Thunder Bay) don’t deliver here.

Forget about the Globe and Mail, the Montreal Gazette, the Vancouver Sun.

Are they so broke they can’t afford to throw a few copies into a baggage compartment to get them out our way?

Could someone not create a social enterprise to ship newspapers to us lost souls up here?

Which brings me, on the size of screen I am currently working on, to the end of my screen-grab compilation.

Perhaps it is the intended effect of crazy people like the Dejected Cheeseburger to drive the rest of us to apathy.

It really is impossible to respond to the inane patter coming from the Whitehouse. One just throws up one’s hands.

Two conversations over the holidays had such effect, both reported to me by relatives after their conversations with other relatives, one in the US and the other in Alberta (no surprise). During both conversations a relative invoked Mr. Trump in  a reverential tone, as if he were a saviour from the corrupt, lying Democrats determined to steal the election and plunge civilization into Soviet-style socialism.

This madness is not going to end anytime soon. Between the wilful blindness, hysteria or brainwashing of so many people and the media’s complete failure to get a credible grip on reality, I’d say we are doomed to more ‘crazy town’ for the rest of 2021.

Which means we need to take real steps to protect ourselves. 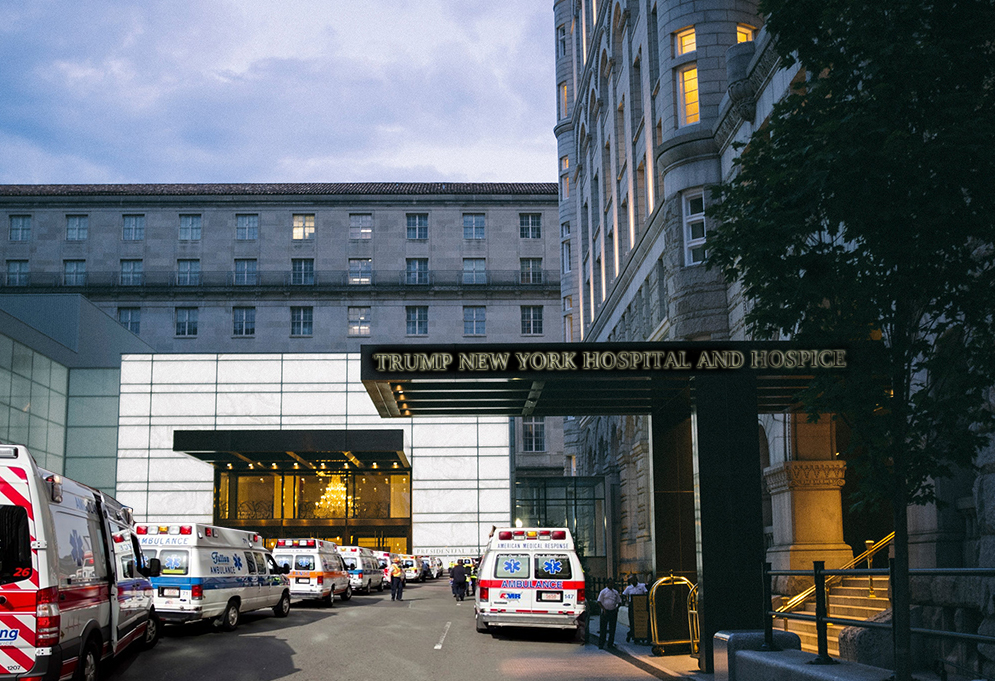 October 23, 2020, New York – In a surprising 180 degree turnaround US President Donald Trump has completely reversed his position on Covid-19. Better known for mocking the science, pandering to anti-maskers and blaming cities on both coasts for spikes in corona virus cases, Trump has emerged from his own “deathbed experience” of the virus apparently transformed.

In a hastily staged press conference in New York, a city he has not visited since the pandemic was declared in March, Trump stated, “Having experienced it first hand myself, I know, I know, how devastating this illness can be.”

In order to assist with the pandemic, Trump announced he has donated the crown jewel of his real estate empire, Trump International Hotel, to the City of New York, to help in the battle against the COVID-19 virus.

Known for his close yet rarely scrutinized ties to the construction industry, Trump was almost miraculously able to swing the trades into action to renovate; the top 25 floors of the hotel were converted virtually overnight into hospital facilities with state-of-the art ventilators in every suite. Minimal renovation was required to the lower floors which are being used for palliative care patients considered to be terminal.

“I felt I should do what I can,” the President said during the press conference announcing, “I want New Yorkers afflicted by this horrible thing to have the best, up to the end if it comes to that, and we hope it doesn’t, but it can, we know that.”

Accompanied by New York City Mayor, Bill de Blasio, who had all but given up on any kind of reasonable engagement with the President after Trump referred to New York as “a shithole,” the Mayor remarked on the turn around, “There are many, many people in the 1%, in the .1%, who know they can help but are just not doing it. It is gratifying to see the President leading by example. Who knows, maybe through all this he’s growing as a person.”

“The hotel industry is taking a beating with this thing anyway,” Trump added, “We’re dying. The towers of New York are empty. Nobody’s coming. And we don’t know where this is going. After it’s over, if it’s ever over, the City can give it back. We’ll fumigate and be back in business in no time. It’s a win-win.”